Death of a Rainmaker: A Dust Bowl Mystery
Coming in October 2018 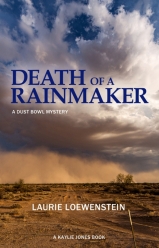 During the mightiest dust storm of the 1930s an itinerant rainmaker is bludgeoned to death in a small Oklahoma town. Sheriff Temple Jennings, who is running for re-election in a tight race, struggles to solve the case. When he arrests a young man from the Civilian Conservation Corps, the sheriff’s wife, Etha, is convinced of the boy’s innocence and sets out to prove it. (Read more here)

Marian Elliot Adams, an outspoken advocate for sensible undergarments for women, sweeps onto the Chautauqua stage under a brown canvas tent on a sweltering August night in 1917, and shocks the gathered town of Emporia with her speech: How can women compete with men in the work place and in life if they are confined by their undergarments? (Read more here)